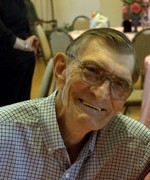 Funeral service will be held Wednesday, March 13, at 2:00 PM at the Higginbotham Funeral Home Chapel in Cross Plains, Texas with Ronnie White officiating. Burial will be in Cottonwood Cemetery in Cottonwood, Texas.

Cecil was born October 10, 1937 in Wellington, Texas to the Late James Albert and Myrtle C. Sublet-Wilson. Cecil married his high school sweet heart Naoma Goble on August 27, 1957 in Cross Plains, Texas. Cecil was a hardworking man, he worked in many different types of fields. He was bricklayer in the streets of Abilene, a baker, worked in the oil field, worked maintenance a Superior Essex in Brownwood and an Evangelist.

Cecil was such an amazing example of how a person should love one another. His love for his Lord could be seen in everything he did daily, by the way he loved his wife, children, friends, strangers and his home town of Cross Plains. He loved to share with others how he was blessed by the best. He was a jokester and always had his family and friends laughing. He was an amazing encourager, always has a kind word, always ready with a prayer for those who asked and even prayed for those who didn’t but he could see needed it. Teaching others how to love the Lord, love others and treat one another and to give forgiveness. Cecil has a strong faith in his Lord and Savior, he showed that by staying strong in the word as he battled cancer and the Lord blessed him with the victory of beating that disease. He was an amazing husband, father and grandfather. He brought up his girls teaching what the true meaning of love was by the way he loved and honored their mother. His pride and joy were his daughters, grandchildren and great grand babies.

In lieu of flowers donations may be made to the Cross Plains Cancer Fund, P.O. Box 183, Cross Plains, Texas 76443.