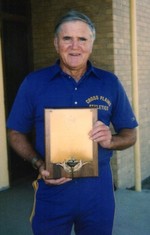 Griff Mack McConal was born on July 2, 1932 in Shack Town, Texas (now known as Welch, Texas). He passed away March 24, 2020, in Cisco, Texas. Coach Mac, as he was known to most, loved sports, being outdoors, and Volkswagen Beetles. He was known to set up hay bales for the grandkids to learn to drive in an old Volkswagen in their demolition derby. He rarely saw a Volkswagen he couldn’t see potential in, much like the young people he coached in football, basketball, track, cross country, and tennis. Many of those kids competed at State over the years.

Mack graduated from Sam Houston State where he boxed as a Golden Glove Boxer. He continued that during his time in the Army where he served in Alaska. He was an avid tennis player, he played well into his eighties. One year he was honored as the Top Tennis Coach in Texas District 1A.

Mack will be missed by his loving wife of 63 years, Shirley (James) McConal; daughters, Roxie Thomas and husband, Jackie of Cross Plains; Luann Sandahl and husband, Scott of Buda; son, Griff “Bubba” McConal and wife, Trina of Groves Beach, CA; 9 grandchildren; 9 great grandchildren and by many who knew and loved him in Cross Plains where he has been a part of the community for 50 years.

Sadly, due to COVID-19 restrictions, the family will have a private funeral service at Higginbotham Funeral Home Chapel with Tom Merryman officiating. Burial will follow at Cross Plains Memorial Park in Cross Plains, Texas.