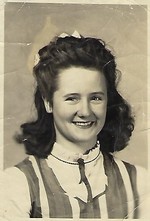 Melba Fern Hutchins, formerly of Cross Plains, Texas passed away on Thursday, May 30, 2019 at the Clyde Nursing Care Center in Clyde, Texas at the age of 91. She was born August 12, 1927 in Callahan County to Steward and Bertha Reid Bentley.

Memorials may be made to ASPCA, Cross Plains Library, Atwell Cemetery Association or charity of your choice.